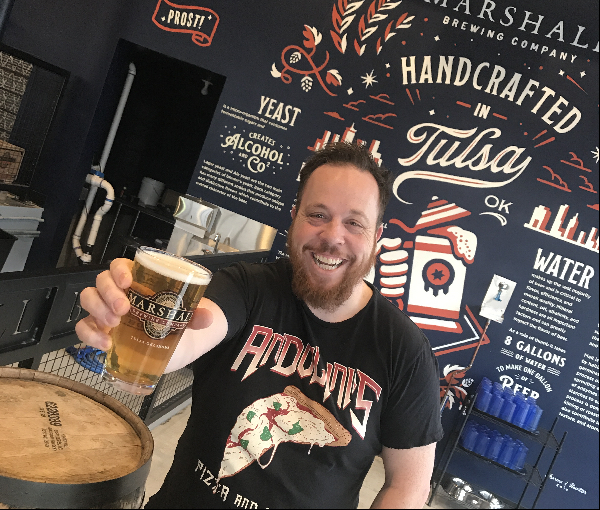 This week's installment features founder and co-owner of Andolini's Pizzeria, Metropolis & STG Gelateria. MIke and his brother Jim began Andolini's in 2005 in Owasso and have grown their concept to multiple locations in and around the Tulsa Metroplex. Andolini's was an early adopter of Marshall Brewing when we opened in 2008 and out of mutual respect for craftsmanship, a strong friendship and partnership have developed. Marshall Brewing proudly offers two house beers specially developed for Andolini's - Roman Birra Rossa, a lightly hoppy amber ale, and Roman Birra Strada - a clean and crisp Roman street beer. Below you will find the enthusiam and passion from Mike Bausch we have grown to admire.

Andolini's Pizzeria was recently named Top 10 Pizzeria in the US by TripAdvisor. Read the article HERE.

My favorite Marshall beer is Sundown Wheat. Now, I really enjoy the other beers as well, especially Big Jamoke, because we've used that beer to make a pizza beer dough and competed with it and won Regional awards for it. I am also a big fan of Arrowhead. The first time I had Arrowhead, I was completely blown away. But Sundown Wheat holds a special place for me because it's so highly drinkable and uniquely perfect in its simplicity. The beer pairs well with practically anything. It works great in the summer. It's still great in the winter. It has a great finish. It's just a fantastic beer that's a STRAIGHT UP BEER. I always say with our pizza, if you can't get a cheese pizza right, don't bother working on that next level game. The same thing applies to beer and Marshall Sundown Wheat is just a Damn perfect beer.

I remember working the Owasso store, which was our first location and having no local beers at all to really choose from. Our most local beer was Choc at the time, who was really just as local to us as Kansas City. It was a perfectly fine brewery that had no draw for us. Another place that we had never visited down south. Upon seeing that there finally was a Tulsa beer, it was an epiphany that things were going to change. I could tell once one brewery finally figured it out, there would be more to come, and I was very right in that prediction. With that said, it was like the feeling of Babe Ruth hitting a home run or the first time Tony Alva was able to skate outside the bowl. Yeah, there's been a lot since then, but the first was the game changer that really tore things up and made things possible.

This is kind of a double edged sword of a question because I really do enjoy drinking Marshall beer at my own restaurants but there are some times where you just want to not be at where you work and the Taproom is an amazing place for that. The old Taproom is very special, but the new Taproom is so gorgeous that it's a fantastic place to have fresh, amazing Marshall beer.

Other places that I enjoy are just sitting in a chair in my backyard looking out OR a fresh pour after tossing dough all night. It's a very, very delicious beer that complements Tulsa especially well.