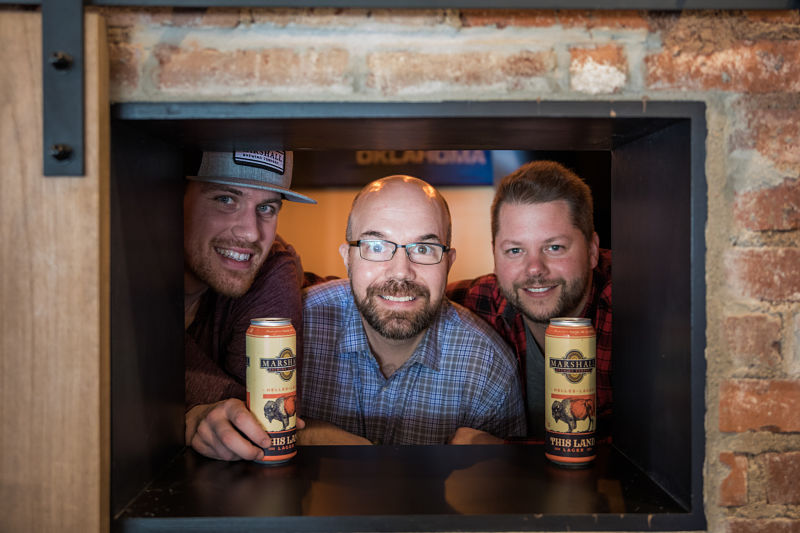 We love podcasts at Marshall Brewing. Whether we are listening while headed to a beer festival or brewing beer, podcast keep us informed and entertained. This week we are excited to introduce the hosts of Scales & Ales Podcast which is recorded in the Snug located inside The Taproom at Marshall Brewing.

Arrowhead Pale Ale.  This is the Marshall seasonal that I miss most when it is gone because this beer is at its absolute best when it is fresh in the summertime.  I have always loved sessionable American Pale Ales.  Arrowhead is about balance for me and is the one that’s “just right” for about any occasion.

It was just before the brewery released it in the summer of 2011.  The brewers had made a couple of pilot batches but I waited until the final production run to have my first taste.  It was the first beer I had with Citra hops and it was before Citra’s popularity exploded.

As a summer seasonal, my favorite place to enjoy Arrowhead Pale Ale is at home by the pool just as it is catching some evening shade on a hot summer day.

My name is Eric Chupp and I absolutely love Marshall’s Sundown Wheat. This beer is the perfect for every occasion. I love it in the summer by the pool or just hanging outside. It tastes so good when it’s ice box cold but when it starts to warm slightly some sort of peachy undertones begin to reveal themselves. I love it in the spring sitting under a covered patio watching and listening to the rain. I love it in the fall when everyone else is drinking the pumpkin-spice-latte-sugar-frappuccino-explosion and I am sipping a on a bottle of Sundown. Hell, I even love it in the winter instead of hot chocolate. There is not much better than throwing back a handful of Sundowns on Thanksgiving and Christmas.

I do… Well at least I think I do. It was at my parents house during the summer and I had just picked it up randomly at the liquor store because I had heard about this local brewery called Marshall’s so I thought I would give it a try. I remember drinking it and thinking that it was really good. But as I mentioned above as the beer began to warm slightly I liked the taste even more. I knew that it was going to be a long-term relationship from that moment forward.

My new favorite place to drink Marshall’s Sundown Wheat, besides the normal couch sessions after work where I curl up with a couple bottles, is at The Snug at Marshall’s Taproom and really just Marshall’s Taproom in general. This spot is so cool. The new Taproom that the guys have built is awesome. If you are reading this and do not know what the The Snug is then you need to get over there to Marshall’s Taproom and check it out. It is an awesome place with some of the best beer in Tulsa. There are multiple screens to catch big games on, you can drink with your buddies at the bar, you can bring your family up there and pick something to play off the game wall or just grab a table and hang out. The Taproom is definitely my favorite place to enjoy a Marshall’s beer.

Marshall Morris of Madness Media at your service

‍‍My favorite beer is El Cucuy, and it is INCREDIBLE! It always reminds me of fall. When I first heard the name, I knew I had to try it and I was so impressed. It has a strong flavor profile, but not too overpowering where you can't have a couple in one sitting.

I remember drinking my first few bottles of El Cucuy in the fall a few years ago. I had heard the lore of El Cucuy while in Costa Rica, and that made this beer a must-try for me once I saw it hit the shelves. I think we finished the 4-pack immediately. It was incredible and was exactly what we needed for a cool fall day.

My favorite place to drink El Cucuy is at the Taproom by Marshall Brewing Company in the Snug. It's right where we record our podcast, and is such a cool spot to enjoy a sports game or play a few games with friends on the weekend. Plus, it doesn't get much fresher than a few hundred feet from the Marshall Brewing production facility!